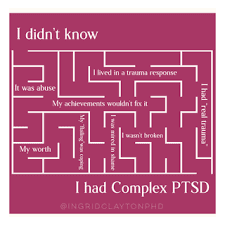 Complex Posttraumatic Stress Disorder (C-PTSD) is not included in the DSM-5. For this reason, we want to make a note of it here, especially as it relates to what could be viewed as treatment-resistant PTSD.

PTSD and C-PTSD are similar in their root causes, with the "C" distinction reflecting the repetitive nature of the trauma experienced over a long period of time. People who have survived complex trauma, especially the trauma of sexual abuse, often display similar symptoms as those who live with Borderline Personality Disorder. Common symptoms include severe depression, mood swings, anger, extreme feelings of loneliness and anxiety. Those who live with these symptoms can be seen as having difficulty regulating their emotions. This often leads to a diagnosis, especially in women, of Borderline Personality Disorder.

With Borderline Personality Disorder the attachment style is one of needing someone to react to. They are hypervigilant about signs of rejection. Their fragmented sense of self is unstable and comes from a base of profound emotional emptiness with fears of being abandoned.

With C-PTSD the attachment style is not based on fear of abandonment. Thiers is a more relational detachment style. In other words, they would prefer to be left alone in many cases. Their hypervigilance is based on safety. It is easier to keep the peace in their lives if they do not have to risk getting close enough to someone who could hurt them.

While C-PTSD can be a severe and debilitating disorder, C-PTSD treatments do exist and are effective.

Recovery from C-PTSD is a long process that often involves the standard treatments for PTSD (cognitive processing of the trauma), as well as additional psychotherapy to work assist emotional regulation, skill building to overcome learned behaviors and habits that formed during the duration of the trauma, and Somatic psychotherapy to help retrain the nervous system to function and respond appropriately instead of defaulting to stress responses. This is especially important if the trauma experienced began during childhood.

We value your feedback and ideas! Reach out on our Community Facebook Page!