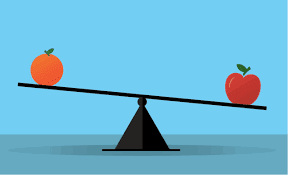 I want to talk to you for a minute about trauma comparison. This is when we "one-up" each other's trauma experience. For example, "I went to Iraq and Afghanistan," or "I got blown up twice! "
One-upsmanship is not something I hear among survivors of other kinds of trauma, probably because it's sincerely messed up to engage in this type of comparison. It would be unreal if, when working with survivors of domestic violence for example, one survivor turned to another and said, "you think you had it bad? I went to the hospital three times!" I hope we can agree that no one is trying to win the trauma lottery here.
Saying "my trauma is more traumatic than your trauma" is unhelpful and, unfortunately, I hear this among military members and Veterans.
I want to be clear: I don't think there is any ill will behind trauma comparison. We don't know what we don't know.
So many times when we finally get the courage up to get help, we are not believed, or we are dismissed outright. The first time I poured my heart out to a psychiatrist, a male colonel at a large military treatment facility, he straight-up told me that he could not help me because I was "lying." To clarify, he stated, "we all know women don't serve in combat."
This was in 2008. I was at my absolute worst with my PTSD symptoms, I was drinking daily, and I was acutely suicidal. This licensed mental health professional and field-grade military officer belittled me, dismissed me, and labeled me with a personality disorder. He kicked me while I was down. I reported it, and no one with any power chose to do anything about it.
Chose. To. Do. Anything. About. It.
I'm not mentioning this for pity, but to promote awareness. So many of us who share our experiences are just not believed — by our doctors, our chains of command, by family members, and even our fellow service members — and it hurts like hell.
Trauma comparison is shitty. It keeps other people from getting the help that they deserve because it belittles and diminishes their experience. What is shittier is choosing not to believe someone who survives trauma.
Trauma comparison is an easy correction we can make. But choosing not to believe someone when they share their trauma experience makes you an asshole.